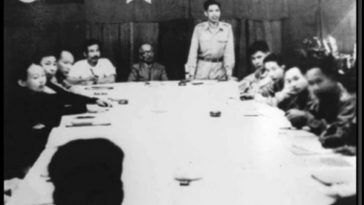 The Vietnam war is an interesting enough subject in itself , but people often ignore what effect it had on the other south-east Asian nations, namely Laos and Cambodia. The Pracheachon were part of this legacy.

In the interest of this article we will leave out Laos, what with the three prices and everything it certainly deserves its own piece. Cambodia, though? Cambodia suffered a lot.

The forerunner to the Pracheachon

Cambodians had fought side by side with their communist Vietnamese brothers, but it was felt that they had been left in the cold after the 1954 Geneva Peace accords.

Ignored by Moscow and Hanoi it was suggested that the Khmer Reds (Khmer Rouge) take part in elections. They did this under the guise of the Pracheachon, essentially a legal front for the Workers Party of Kampuchea. This was later to become the .

As the legal front party they were to enjoy little success, due to the constant harresmnet from what was essentially the sole legal political party, namely , the party of Sihanouk. Sihanouk was no longer “king”, but he was very much in charge of Cambodia.

Now whilst they did not have much influence in parliament  the left-wing was very much coveted by Sihanok. This was to become particularly apt when the right and Lon Nol were to gain prominence.

Khieu  who would later become head of state of was in some ways the smiling nice face of Cambodian communism, Sihanouk had him in his cabinet until he fled to the jungles to be reunited with Pol Pot and the rest of the Workers Party of Kampuchea. For a time at least many thought he had been murdered on the instructions of Sihanouk, an irony considering they would soon be joined together as allies.

The party took part in the 1972 elections, but by 1975 it served no use, a new Cambodia under the leadership of Pol Pot had begun.