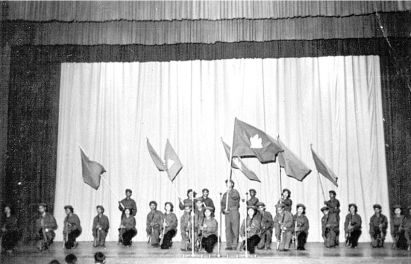 After the Khmer Rouge took power on April 17th 1975 from the military regime of Lon Nol countries of the world did not exactly rush around to open missions in the deserted capital of Phnom Penh.

That being said a few countries did host embassies in the country, all of them from the Eastern Bloc.

Embassies in Phnom Penh during the Khmer Rouge period

China was the main backer of the Khmer Rouge, whilst simultaneously being good friends with King Sihanouk. Officially at least the Khmer Rouge followed a form of Maoism, even though China was going through its opening up process.

The United States backed China in backing the Khmer Rouge as a bulwark against Soviet and Vietnamese aims in the region.

King Sihanouk and President Kim Il-Sung had been friends since meeting at the Non-Aligned-Movement (NAM), with Sihanouk living for many years in a villa in Pyongyang. That being said even after Sihanouk had stepped down as head of state North Korea still sent a congratulatory message to the Khmer Rouge.

The friendship between Egypt and Democratic Kampuchea can be seen through the lens of the Non-Aligned-Movement of which Egypt was a leading player.

Albania famously sided with the Chinese during the Sino-Soviet split and in many ways there were similarities between the outlook of Enver Hoxha and Pol Pot.

Whilst Cuba was largely aligned with the Soviet Union on most things it tried to play a leading role in helping revolutionaries in the developing world.

Vietnam essentially gave birth to the Khmer Rouge and it was expected they would be junior partners to Vietnam (which eventually happened). Vietnam withdrew recognition in late 1977 and eventually there was war.

Romania under Ceausescu famously liked to tread their own path which meat they continued to hold relations with Democratic Kampuchea.

Leader of Yugoslavia Tito famously managed to keep cordial relations with most of the world, with one foot in both east and west. Another huge player in the Non-Aligned-Movement, of which Cambodia had never left. In the constitution of Democratic Kampuchea it also stated the wish of the country to be part of this movement.

It should be noted that all embassy staff, including diplomats were confined to their embassies, from where they had goods delivered. The exception to this was the Chinese mission, who were free to travel.

The embassy in Vietnam was to close in December 1977 after the Khmer Rouge began their purges on people with “Cambodian bodies with Vietnamese brains”.

China was obviously the principle backer of the regime and provided military hardware, food, equipment, and specialist advisors on everything from warfare to road building.

In the end though they did not provide troops during the war with Vietnam, something that Democratic Kampuchea had relied on to some extent and which certainly hastened their fall from power.

Things to Consider When Choosing a Casino

To Toilet Bowl or Not to Use a Toto Washlet?